Why Are Oxygen Masks Important in an Aviation Emergency 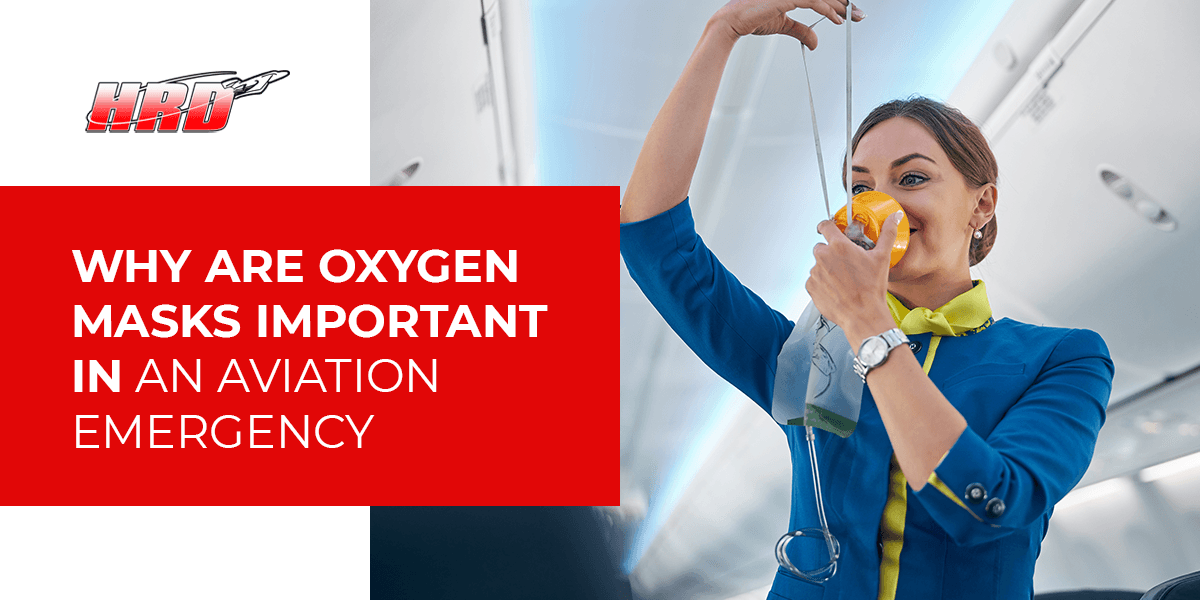 Why Are Oxygen Masks Important in an Aviation Emergency

Oxygen masks are a crucial component of an airplane’s safety equipment, particularly in the oxygen systems for cabin passengers and flight crew members. When cabin pressure drops, emergency oxygen masks provide life-saving oxygen for passengers and crew members. Pilots also use them as precautionary measures when the copilot leaves the cockpit during bathroom breaks and to maintain the extra level of clarity and focus needed to fly a plane in less oxygen-rich altitudes.

Why Are Oxygen Masks Important and What Are They Used For?

When the body doesn’t have enough oxygen, a condition known as hypoxia can set in. Hypoxia can cause symptoms such as confusion, lightheadedness, cyanosis or a sense of euphoria. As hypoxia progresses, people may pass out due to a lack of oxygen. The condition sets in quickly when oxygen levels are low. If anything happens to the oxygen levels, people have about 30 seconds to don an oxygen mask before the symptoms set in. This short window is why it’s so important that airlines always announce that passengers should don their masks before assisting others.

Typically, the airplane pressurizes to counteract the drop in air pressure at high altitudes. However, oxygen masks provide redundancy. If anything happens to the pressurization system, or the plane experiences any difficulties while in flight, oxygen masks will deploy. Oxygen masks supply roughly 10-14 minutes of oxygen, which is more than enough time for a pilot to descend below 10,000 feet, where the atmosphere has enough oxygen. 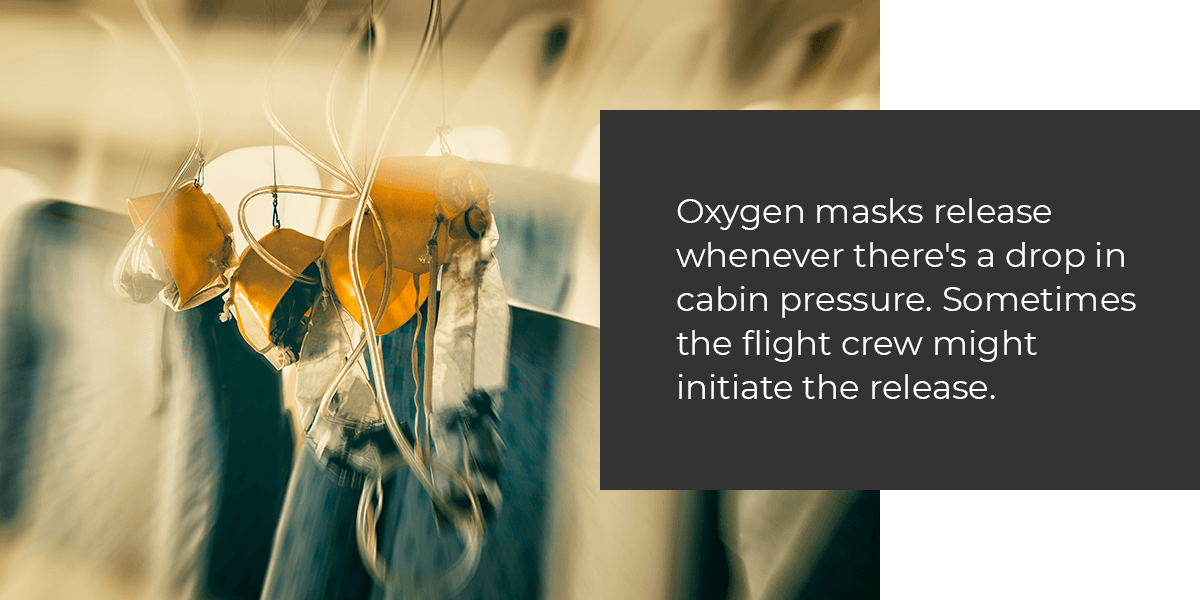 When and How Are Oxygen Masks Released?

Oxygen masks release whenever there’s a drop in cabin pressure. Sometimes the flight crew might initiate the release. However, it usually triggers automatically when the cabin altitude gets to 14,000 feet. The emergency oxygen masks for passengers are stowed in an overhead chamber. When they’re released, a panel opens up and the masks drop down, revealing a yellow silicone cup for the mouth and nose, clear tubing and a bag.

When the masks descend, it’s often described as a “rubber jungle.” They drop down above every seat, and extras drop down in the lavatory and in the aisles to ensure someone can grab and don a mask from wherever they are. The spare masks in walkways also ensure enough masks for infants.

How Do Oxygen Masks Work?

When an oxygen mask drops down, it starts supplying oxygen as soon as someone tugs on it to put it on. If you’ve been on a flight before, you’ve probably heard the in-flight oxygen mask lesson remind you that although the bag may not inflate, oxygen is flowing through the mask.

This announcement is true — the bag is not the source of oxygen but rather a deposit to collect oxygen from the source. If the wearer is breathing fast or heavily, which is more likely in a situation requiring the masks, the bag will not collect any extra oxygen. However, it is still providing plenty to the wearer. Someone breathing lightly or more slowly will likely see the bag inflate more. In any case, the mask is providing at least 122 mmHG of oxygen, as required by the Federal Aviation Administration (FAA).

The masks supply supplemental oxygen for a short duration. According to FAA’s CFR 91.211(b)(i), every occupant must have at least 10 minutes of oxygen on any flight above flight level 250. While it may not sound like a lot, this amount is more than enough.

When pilots recognize a loss of pressure, they immediately initiate a descent. From the passengers’ perspective, it might seem like the plane is free falling. However, this situation is highly controlled and part of the procedure. The aircraft will descend as quickly as possible to below 10,000 feet, where oxygen levels are breathable. This process will happen long before the oxygen supply runs low.

What Are Oxygen Masks Filled With?

Many people imagine that the masks connect to oxygen tanks similar to what you might see with a respiratory patient or scuba diver. While some planes do use tanks like this, especially for crew members, they are incredibly heavy. To save space and weight, most aircraft emergency oxygen systems don’t have bottled oxygen for passenger masks. Instead, they have a cocktail of chemicals, usually sodium perchlorate and iron oxide, that produce oxygen when burned.

Rest assured — the air filtering into the bag and through the tubes into the mask is oxygen. While it may contain some particles of chemical dust, it’s safe to breathe. Because of the chemical reaction producing oxygen on the plane, passengers may report a burning smell. This smell is not a sign of aircraft malfunction, just the chemical oxygen generator doing its job.

Do Crew Members and Passengers Use the Same Type of Oxygen Masks?

Pilots, copilots and cockpit crewmembers use specialized oxygen masks because they have additional responsibilities and risks. They also have to wear oxygen masks in some nonemergency situations. For example, if a pilot is alone in the cockpit, they must wear the oxygen mask continuously until the copilot returns. They must also wear the mask continuously when the airplane cabin has a pressure equivalent of 10,000 feet.

Pilots may also occasionally use their oxygen masks to improve night vision. The amount of oxygen in a pressurized aircraft is still below what we experience on the ground. At those oxygen levels, night vision can decrease. Pilots often use the oxygen mask to improve their visibility while preparing for landing.

While emergency oxygen masks for passengers prevent physiological injury, they may not provide the same oxygen level the pilot needs to remain mentally clear-headed to perform complex tasks while landing the plane. Oxygen masks for flight crew supply 100% oxygen in the first few seconds, immediately address any hypoxia symptoms, and can then be switched to a less-concentrated supply.

Many oxygen masks are quick donning to ensure they can be secured on the mouth and nose within seconds. In the cockpit, there’s also an additional concern for smoke exposure. To address this, masks include safety goggles to protect eyes from smoke. Pilot oxygen masks also feature built-in microphones so the pilot can maintain communications during an emergency. 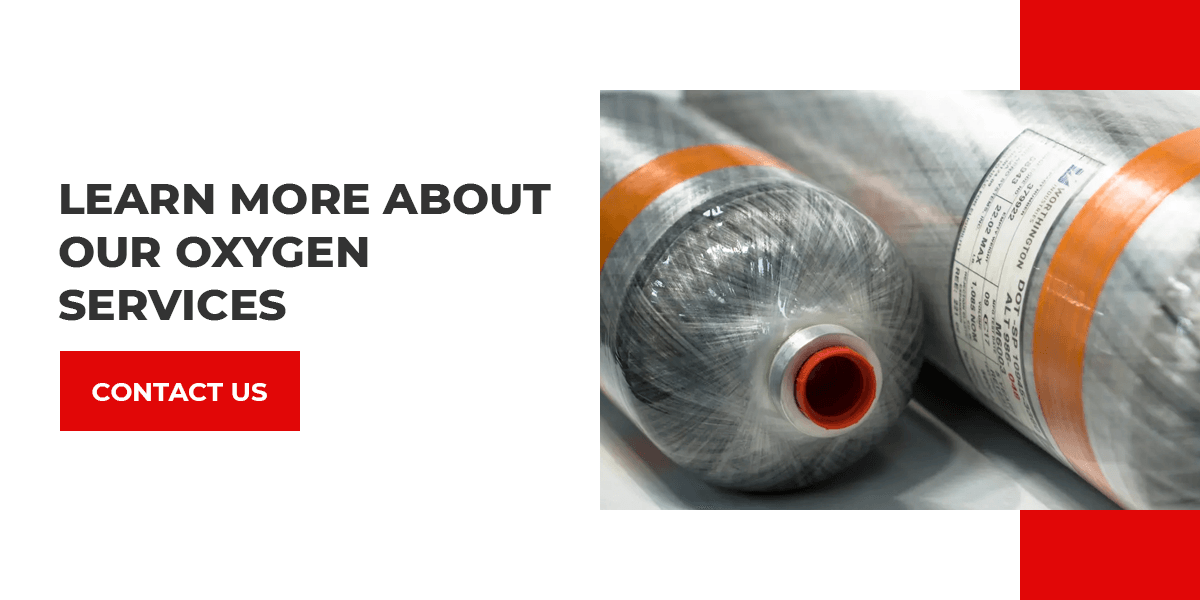 Learn More About Our Oxygen Services

HRD Aero Systems offers a range of aircraft emergency oxygen system services. We can service and inspect oxygen system components such as regulators, cylinders, masks and other elements of your oxygen system with world-class support. We work with military, commercial and corporate aircraft and can service systems from brands such as:

To learn more about our oxygen services or to request repairs, contact HRD Aero Systems today.