The History of Aviation Safety

Safety is one of the top priorities in aircraft design, and as technology continues to advance, so do available aviation safety measures.

According to investigation statistics from the National Transportation Safety Board (NTSB), American aviation safety has steadily improved throughout the years. This is evident in the downward trend in fatal accidents from 2001 to 2020. While fatalities do occur, the number of accidents occurring each year progressively declined:

In this post, we’ll dive into the rich history of aviation and its effect on the evolution of aviation safety.

What Is the History of Aviation?

You can trace aviation history all the way back to the Renaissance, when Italian inventor and artist Leonardo da Vinci wrote down his observations of aerodynamics in his Codex on the Flight of Birds. These principles laid the foundations for the eventual development of aircraft.

More sophisticated aircraft came later, during the Industrial Revolution of the late 19th century. Here are some important milestones in early aviation history: 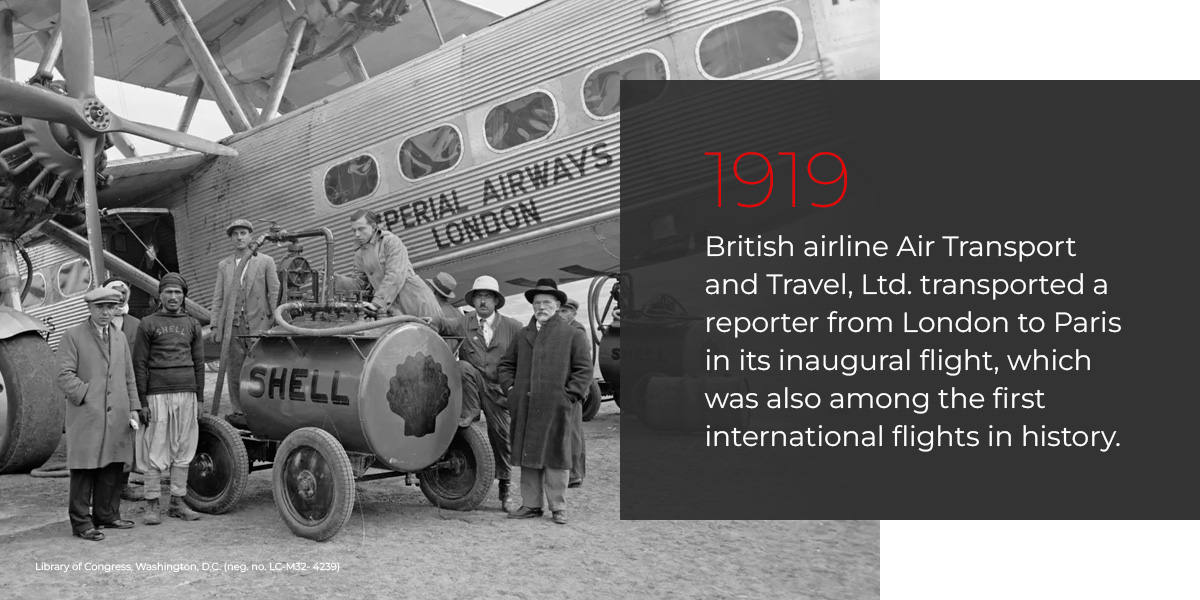 The first recorded instances of passenger transport took place between the 1890s and early 1900s. These early flights allowed commercial and civil aviation to expand over the course of the next century:

Safety measures in early aircraft were limited due to existing technology, leading to accidents that could have been prevented. These tragedies taught aviation industry experts valuable lessons in preparing for the worst-case scenarios:

Early aviation safety was defined by the technological limitations of the time. Industry leaders recognized that commercial aircraft would be forever limited without assistance from the federal government and urged government leaders to establish and improve aviation safety standards.

Following the government’s initial involvement in 1926, federal regulations continued to increase throughout the 20th century, leading to the formation of several different agencies.

The Federal Aviation Administration (FAA) is a government agency dedicated to improving aviation safety for both domestic and foreign flights. Its history is a long one, beginning with the Air Commerce Act in 1926. Here’s a timeline of the many iterations of the FAA:

Since the 1960s, the FAA’s responsibilities have continued to grow. Currently, their safety programs include:

The National Transportation Safety Board (NTSB) investigates accidents in public transportation, including aircraft. The NTSB was established in 1967 when Congress first created the Department of Transportation.

Originally intended as an organization within the DOT, the NTSB became its own independent organization in 1974 to ensure fair, objective investigations and recommendations. Additionally, the NTSB’s duties expanded in 1996 to include providing federal assistance to families of aviation accident victims.

However, the NTSB is not involved with the operation, regulation or funding of any mode of transportation that falls under government authority. The Board has conducted almost 152,000 investigations since its humble beginnings in 1967 and continues to perform this duty to this day.

When World War I broke out in July of 1914, aviation experts realized the strategic advantage of using aircraft for military applications. As wartime airplane use became increasingly common, aircraft designs evolved, leading to the development of enhanced navigation and visualization technologies that would form the framework for later safety improvements.

World War I planes were mostly used for reconnaissance, allowing pilots to fly into enemy territory and gain intel they could have only dreamed of in previous years. While the pilot focused on flying the plane, the passenger would sketch or take notes of his observations, which proved critical early on in the war.

Fighter planes entered the scene in 1915, when combatants realized that striking down enemy spy planes would prevent the other side from getting the information they needed.

Further, the invention of the radiotelephone during World War I created a way for pilots to communicate while in the air, which significantly reduced the risk of collision. Aircraft design also changed significantly in response to military needs. Manufacturers began building planes out of aluminum rather than wood and fabric, which resulted in lighter, more durable vessels and reduced aircraft flammability.

By World War II, the double-wing biplane design had essentially become obsolete. The sleek, efficient monoplane took over as the superior air vehicle.

Innovation extended to the cockpit, as well. Radar systems were developed during World War II, providing pilots with a more accurate idea of their plane’s position in relation to other planes and environmental obstacles such as mountains or skyscrapers. It also helped pilots make more controlled landings, ensuring their safety as well as extending the life of their planes.

The manufacturing process changed significantly in response to wartime events. From 1941 to the end of the war in 1945, American manufacturers made an astonishing 300,317 military planes. The explosion in demand as well as the increasing complexity of aircraft parts and systems prompted standardization across the industry.

By the mid-20th century, many believed that the Civil Aeronautics Board had outlived its usefulness. Unregulated airlines were charging lower fares, which meant they were getting more business. Despite lobbying from airlines who were against deregulation, Congress passed the Airline Deregulation Act in 1978, which transformed the commercial airline industry by allowing airlines to set their own routes and fares.

This act sparked intense competition between airlines and drove prices down, which prompted an explosion in passenger flights. Dozens of new airlines popped up as existing companies expanded their reach.

However, demand slowed during the recession of the 1980s, driving many airlines out of business and spurring others to merge. For example, the former airline giant Pan American World Airways (Pan Am) ended in bankruptcy in 1991 due to the pressures of deregulation on legacy airlines.

While many elements of early aircraft came and went, the following developments were crucial in improving aviation efficiency and safety throughout history. Some, including glass cockpit systems, are still in use today.

Military research conducted in multiple countries during the 1930s and 1940s led to the invention of the jet engine, one of the most significant innovations in the history of aviation. While it may have begun as military technology, the jet engine revolutionized commercial aviation by providing a more efficient and reliable alternative to traditional piston engines.

Modern commercial airplanes are equipped with multiple turbine engines so that even if one engine fails, the backups are able to produce enough power to enable a safe landing.

Air pressure decreases the higher you go, which can be dangerous without supplemental oxygen.

The air pressure at sea level is approximately 14.7 pounds per square inch (psi), but at 18,000 feet, it drops to about 7.3 psi. At this pressure, you’ll last about 30 minutes before losing consciousness. Maintaining a low altitude pressure of around 11 to 12 psi within the cabin ensures a safe ascension to high altitudes.

To prepare for situations in which the cabin depressurizes, airplanes stow oxygen masks in the ceilings above passengers.

During the World Wars, development of these technologies ramped up even more, producing high-tech planes with effective communication capabilities.

With so many planes in the air at the same time, maintaining clear communication between pilots and air traffic controllers (ATC) is crucial for preventing collisions and other accidents. Aviation communication has gone through several different iterations through the years:

A crucial innovation in aircraft safety history was the glass cockpit, named for the digital screens that replaced traditional analog gauges. Initially, these displays were cathode ray tubes, but modern versions use liquid-crystal display (LCD) screens.

The first plane to include a true glass cockpit was the 1981 Boeing 767 — now, this technology is used in aircraft of all shapes and sizes. Some common glass cockpit instruments include:

How Has the History of Airplane Safety Changed Since Deregulation?

In the years since Congress passed the Aircraft Deregulation Act, the commercial aviation industry has seen significant changes in business and safety requirements. The explosion in passenger flights significantly increased the duties of the FAA, demonstrating a need to modernize the National Airspace System (NAS), the network of controlled and uncontrolled airspace.

Since 2002, the FAA has worked to develop strategies for increasing the affordability and safety of commercial aviation. Following are some important FAA initiatives for improving aviation safety in the years to come.

The FAA’s Safety Assurance System (SAS) is a tool the agency uses to certify and monitor aircraft and aviation personnel. It includes a set of policies and software that allows the FAA Flight Standards Service to capture important data.

Overall, the goal of this system is to identify hazards and control or eliminate associated risks by utilizing information collected during design and performance assessments. This information allows the FAA to standardize compliance requirements and helps aviation safety inspectors (ASIs) to determine the best oversight decisions in multiple types of situations.

In response to the rapid rise of airline popularity brought on by deregulation, the FAA has placed a new focus on modernizing the NAS. This new initiative, titled the NextGen program, comprises a series of programs, technologies and policies that aim to improve NAS operations moving forward.

Part of this initiative involves leveraging existing and new infrastructure to support new innovations. According to the NextGen Annual Report, some new developments in modernization include: 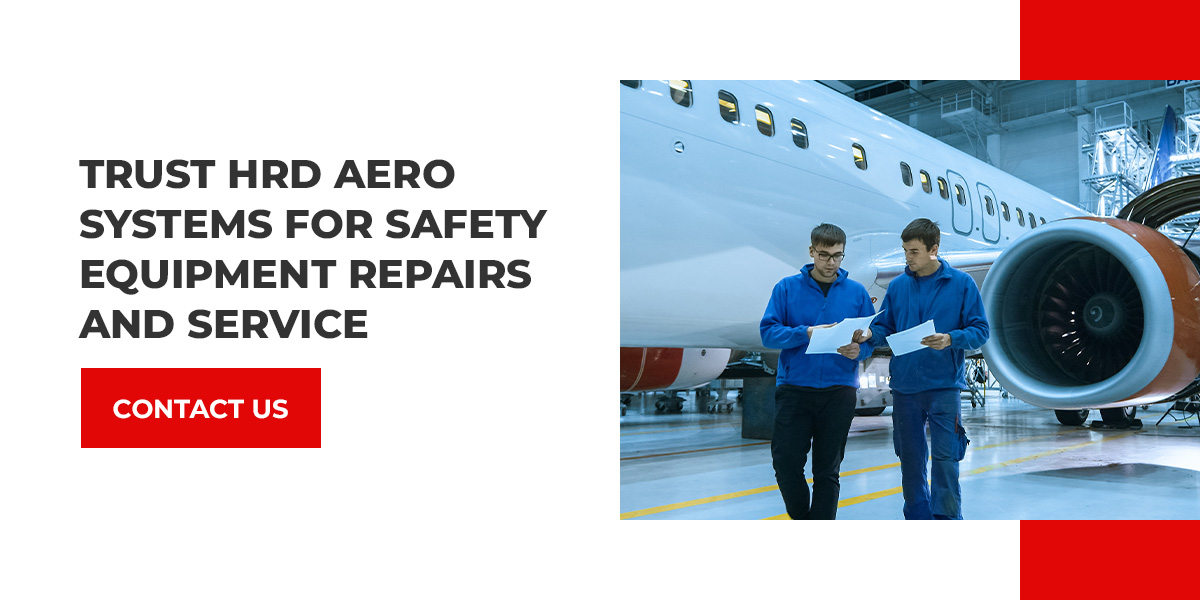 As history progresses, so do safety requirements. At HRD Aero Systems, we service and repair the aircraft safety equipment you need to comply with industry regulations and keep your passengers and crew safe. We are an FAA, Joint Aviation Authorities (JAA) and airline-approved repair station and a one-stop shop for the following equipment services:

We know that your staff is just as important for flight safety as state-of-the-art communication and positioning technology are, so we also offer hands-on training sessions to prepare your flight crew for any emergency situations.

Our services comply with regulations set out by the FAA, European Aviation Safety Agency (EASA), Air Transport Canada and more, so you can trust us to provide the utmost in safety while keeping costs low.

You can rely on us to provide excellent service with quick turnaround times and affordable costs. Contact us today for more information about our products and services.